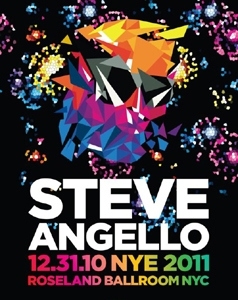 If wisdom comes with age, then Roseland Ballroom is the expert on how to throw a great New Year’s Eve party. Since its first New Year’s Eve party in 1920, Roseland Ballroom has kept its tradition of throwing lavish parties. The venue has hosted a slew of A-list events from the Entourage Season Four premiere party to the Sopranos season finale after-party, and transforms its décor with each extravaganza it hosts.

For New Year’s Eve 2011 in New York City, Roseland Ballroom will invite its guests into the 18,000-square-foot venue where guests can expect an international and cosmopolitan audience in attendance.

The New Year’s Eve party will be held on Roseland’s first floor, which can hold more than 3,000 patrons and where guests can sip champagne and drink cocktails around its 1,500 square-foot bar. Did we mention that all of the sound for the evening would be supplied by Swedish House Mafia Star, Steve Angello?!?!

Roseland is offering VIP ticket holders an open bar, as well as choice spots with the best views in the house. And there’s even more luxury in store for large groups who want to maximize their celebration. The “Swedish VIP Pack” gives up to 20 partiers 4 bottles of champagne, 3 bottles of vodka, 2 bottles of Patron and buckets of beer. But it doesn’t stop there. “Swedish VIP’s” will also receive autographed Steve Angello merch and Swedish massages! If you are looking for a New Year’s Eve to remember for years to come, Roseland Ballroom will deliver.