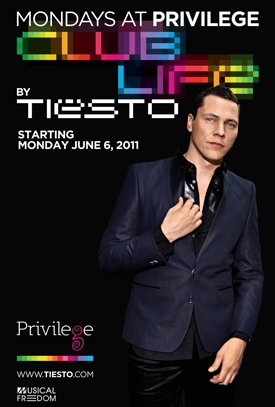 Tïesto has announced that he is returning to Privilege Ibiza this summer for his 2011 Club Life residency. This showcase will take place on Monday night’s throughout the summer starting on Monday, June 6th. Tïesto is the biggest DJ in the world playing at the biggest club in the world; this is his fourth consecutive year at Privilege.

DJing at Privilege Ibiza is a great source of inspiration for Tïesto. He feeds off the fans which allow him to experiment with new sounds and take sets in multiple directions. Tïesto’s 2009 landmark artist album, Kaleidoscope, was directly influenced by the fans at Privilege, DJs who perform there and the positive energy throughout the island of Ibiza. Tïesto was recently voted “The Greatest DJ Of All Time” by Mixmag and widely regarded as the world’s biggest DJ/producer. He was nominated for two 2010 Billboard Touring Awards and listed in Billboard’s Top 25 biggest grossing global touring acts of 2010.

Busier than ever, Tïesto has launched “Tïesto in Concert” in Las Vegas. He has his monthly residency at The Joint in the Hard Rock Hotel and Casino and has global tour dates supporting the release of his, highly anticipated, album Club Life – Volume One Las Vegas.

With all these appearences you will be sure to catch an amazing set by Tïesto at least once during this summer.