Sad day at the Love Parade in Duisburg Germany 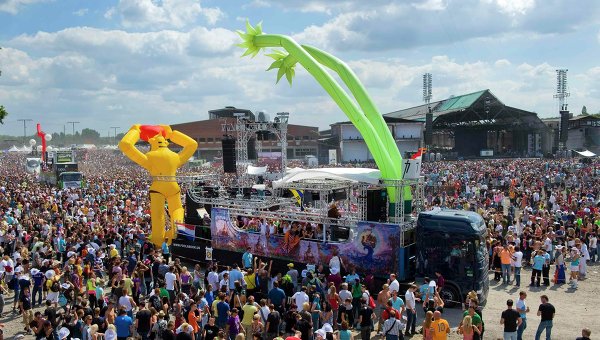 At least 10 people have been killed at the Love Parade electronic music festival in the German city of Duisburg, police have said.

The deaths reportedly occurred after panic sparked a stampede. At least another 15 people were hurt.

Berlin hosted the Love Parade until 2006 but it has since been held in various German cities.

Organisers of the Duisburg event had said they expected more than one million people to attend.
No evacuation

Duisburg police director Ralf Klauck said: “Initial information shows 10 people were killed in a mass panic by an entrance tunnel, 10 had to be resuscitated and 15 more were injured.”
Map

Unconfirmed German media reports said panic broke out and victims were crushed after authorities tried to stop thousands of people from trying to get into the parade area.

City officials were said to have chosen not to evacuate the grounds of the day-long festival immediately, fearing it might spark more panic.

Many of those attending appeared unaware of what had happened.

The event attracts music fans from all over the world, with floats from Brazil, Russia, the Netherlands, Spain and Australia among other nations.

The floats had been expected to parade through the city for 10 hours.

The event began in Berlin in 1989 as a peace demonstration and developed into a huge open-air music festival.

Financial constraints and differences with Berlin officials led to the event moving to other German cities.

For more information and Video please click on the Source.